Fireworks display over the city’s riverfront

Crowds enjoying a free outdoor concert during Fridays After 5, a weekly event during the summer

Aerial view of the city’s downtown, located right on the Ohio River

Outside the Bluegrass Hall of Fame & Museum, one of the city’s premier attractions

The sprawling playground at Smothers Park, named the top playground in the world by the Landscape Architects Network

Fall in love with bluegrass music, bourbon and barbecue on the Ohio River

In western Kentucky, on a bend along the Ohio River, discover a city where families can play, foodies can indulge and music lovers can dance the night away to traditional bluegrass music. Owensboro may be the fourth-largest city in Kentucky, but it retains the personality and charm of a small Southeastern town. Downtown Owensboro invites a scenic stroll and a leisurely lunch date, followed by live bluegrass music, a visit to an art museum or a bourbon distillery tour. Come in the summertime for festivals at the riverfront, or visit in fall for utterly idyllic autumn weather.


Arts and Culture in Owensboro

Whether you’re a bluegrass fanatic or a casual listener, the Bluegrass Music Hall of Fame and Museum is a must-visit when in Owensboro. Through interactive exhibits, galleries and one-of-a-kind memorabilia, learn all about the history and artists of this toe-tapping style of music native to the region. There’s even a “pickin’ parlor” where you can try out different bluegrass instruments. Be sure to check the museum’s event calendar to catch a live bluegrass show. The Woodward Theatre was built specifically for acoustic music, while the outdoor stage hosts musical acts at a riverside venue. Nearby, the Owensboro Museum of Fine Art is home to a sculpture park, 19th century German stained glass, American folk art and a permanent collection with pieces dating to the 15th century, plus two buildings listed on the National Register of Historic Sites.

If there’s one type of food that Owensboro is known for, it’s barbecue. Mutton barbecue — the slow-cooked meat of adult sheep — was born here, and the place to taste it is Moonlite Bar-B-Q Inn. Voted the Best Barbecue in Kentucky, Moonlite’s lunch and dinner buffet of endless barbecued meats and traditional side dishes brings in hungry diners from around the world. Other local barbecue favorites include Old Hickory Bar-B-Que and Ole South Bar-B-Q; no Owensboro trip is complete without trying all three hot spots. Of course, you’ll want to wash it all down afterward with some traditional Kentucky bourbon. See how it’s made and try samples of rye, honey and straight bourbon whiskey at Green River Distilling Co., the only distillery in Owensboro open to the public. Want to celebrate a special occasion? The Miller House Restaurant is the go-to for refined dining and make-your-own bourbon flights. The restaurant boasts western Kentucky’s largest bourbon bar — about 600 different bourbons adorn their Wall of Whiskey.

Attractions for the Family

Owensboro was made for family-friendly travel. Named the top playground in the world by the Landscape Architects Network, Smothers Park boasts not only its massive playground, but also a splash park, “dancing” water fountains and a soothing waterfall feature that cascades into the river. Enjoy a waterfront stroll and picturesque views of the Owensboro Bridge that connects to Indiana across the river. If your crew loves the outdoors, go for a walk amid meticulously maintained gardens at the Western Kentucky Botanical Garden or try apple, peach or strawberry picking at Reid’s Orchard. Preservation Station, one of Owensboro’s top attractions, is a former elementary school turned marketplace, restaurant and event center. Local retailers sell everything from Amish furniture to country antiques; it’s the perfect place to pick up a unique keepsake.

Owensboro is recognized as the birthplace of the U.S. music genre of bluegrass.

Mutton barbecue, the slow-cooked meat of older adult sheep, was invented in Owensboro.

Exploring Owensboro, Kentucky by Way of The Wooks

Owensboro, Kentucky Might Just Be the Heartbeat of American Culture

An Insider’s Guide to the Kentucky Derby

Off to the Horse Races in the USA!

Louisville, Kentucky: A City Full of Parks for Every Explorer

A Weekend in Louisville

The Great Smoky Mountains: A Natural Trip From Nashville

An Insider’s Guide to the Indianapolis 500

Ask a Local About Indiana

Boats and Bourbon: The Perfect Pair in Kentucky 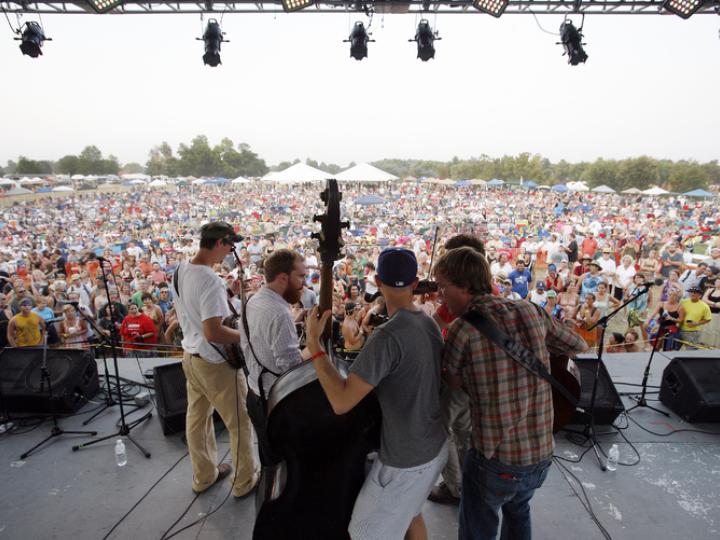 7 Festivals to Boogie to the Blues

Boats and Bourbon: The Perfect Pair in Kentucky

Barbecue and Brews from Missouri to Kentucky

America’s Spirits: Tour the Homes of Bourbon and Whiskey